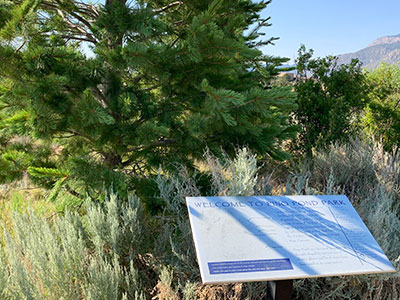 “The Demo Garden has moved into a very active phase this spring,” said Ray Berg who oversaw the volunteer project. “The garden is ready for planting and we need to get projects completed before it gets too hot this summer.”

Homeowners interested in volunteering for any job at the Demo Garden should email Ray at rsberg01@comcast.net. He will contact volunteers and arrange for tools, instructions and meeting times. “We don’t require that volunteers help out on every project,” Ray said. “If all you can do is help paint the fence this Saturday, that would be great. We need lots of people for lots of different jobs so that we can get this project up and running.”

The city pays for water and has donated about two dozen small plant identification signs. The original irrigation lines and pathways were built by High Desert’s developer to highlight low-water use, native and other permitted plants for High Desert homeowners in 2001. The park was then turned over to the city but, due to budget restrictions, it was neglected. The garden rapidly became heavily overgrown with Apache plume and chamisa over the next decade, obscuring the paths and choking out plants.

In August of 2010, Ray discovered blueprints of the garden and he and other residents became determined to resurrect the area as a place for residents to see living examples of plants found on the High Desert Permitted Plants list. Most of the original irrigation remained in place despite neglect, and the city agreed to begin watering the area again once the lines were repaired.

The Association, through the Board, allocated limited funds last year for repairing the irrigation lines and purchasing plants and fencing. But all the labor involved in clearing and removing brush, restoring paths, pruning, repairing irrigation lines and putting up fencing has come from High Desert volunteers working weekends and evenings over the past two years. Ray estimates that High Desert volunteers have put in more than 300 hours of work since August 2010.

Michelle Lesher: Daytime: 505-844-2854: mlesher222@comcast.net
High Desert volunteers meet at least twice a year to remove trash along a stretch of Tramway right outside the High Desert entrance. Afterward, the group usually eats lunch together and plans the next clean-up.

Open Position: (If interested in volunteering, please contact highdesertmanager@hoamco.com)
This group has adopted High Desert Park and is committed to cleaning and maintaining the park several times a year.