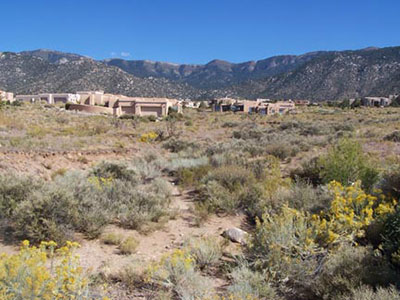 Where Did Our Arroyos Come From?

The arroyo system in Albuquerque is part of an alluvial fan that forms from the breakdown of debris of Sandia Mountain rock that is washed down from the canyons. The deposited debris forms a slope up to about 10% consisting of sand, clay, organic materials and other constituents that form the local soil. As storms deposit material in an arroyo, the main channel may fill, then break away and start flowing along a new path. The resulting pattern in the upper part of the fan looks like a river delta flowing backwards due to numerous branches that emerge from the mouths of canyons along the face of the mountain.

The far eastern part of Albuquerque lies on the alluvial fan created by the numerous major and minor drainage basins coming out of the canyons they are named after: La Cueva on the north, Domingo Baca, Pino, Bear, Embudito, Piedra Lisa, Embudo, and Tijeras on the south. High Desert stretches from the Pino Arroyo, which drains the Pino Dam Basin, across the Bear Canyon Basin, which runs along Bear Canyon Arroyo, to south of Embudito Arroyo where Trailhead Village lies.

The Pino Dam Basin drains the northern half of High Desert. The South Pino Arroyo generally runs west between Mountain Highlands and Desert Highlands Villages into Pino Pond in Pino Park, then west along Blue Grama Road, crossing Tramway Boulevard just south of Simms Park Road. It joins the Pino Arroyo drainage west of Tramway and empties into Pino Dam at the eastern end of Tanoan Country Club and the Tanoan East Development.

The Bear Canyon Basin, which drains the southern half, runs generally southwest to the south of The Highlands, Overlook, and Pinon Point Villages, then west under Tramway and empties into the John Robert Dam on the east side of Juan Tabo just north of Manitoba. It then goes west to the Bear Canyon Dam at the west end of the Arroyo del Oso Golf Course.

Bear Canyon Arroyo
One of the more visible examples of the branching of the arroyos is in the Bear Canyon Arroyo below the Bear Training Dike maintained by AMAFCA. The Dike, or Berm, was built to divert water from the branch that begins south of The Highlands Village and goes west along the south side of Overlook Village, then along the north side of Spain Rd. Similar examples are still visible throughout the eastern parts of High Desert, especially in the higher areas, such as Mountain Highlands, Desert Highlands, and the Highlands Villages. These side arroyos are some of the older paths taken by the arroyo as it flowed down from the canyons.

The arroyos are one of the most significant geographic features of High Desert. When High Desert was designed, one of the goals was to try to maintain to the extent possible the natural environment in its original state.

The preservation of the arroyos is due in large part to the contributions of Michial M. Emery, a Bohannan-Huston engineer who was able to convince both AMAFCA and the City of Albuquerque to accept the concept and agree to the plan for arroyo maintenance.

This plan laid out what needed to be done to keep the arroyos natural as habitats for native plants and animals. (For example, see the High Desert Sector Development Plan, Volume One, Case Number SD-91-3, AX-92-8, Z-92-63, as Amended by the Environmental Planning Commission on December 20, 2001.)

The plan implements a series of berms and collection ponds that eliminate the large in-flows from the arroyos entering the development by diverting or by collecting and harvesting the water for irrigation. An example of a diversion berm is the one you can walk along when you go from Michial M. Emery Trailhead to the end of Canada del Oso along the “Berm” Trail. This berm eliminates all in-flow to the arroyo that goes along the north side of Spain Road. The water that does collect due to the area below the berm is harvested in the water kiva at Spain and Imperata. Additional collection / harvesting features on this arroyo are at Spain and Cortaderia.

Ponds (both filled and empty) are visible all along High Desert Street, such as near Red Yucca Ave., near Elena Gallegos Place, near Blue Grama Rd, and at Pino Park (seen an empty pond in the photo above). Today these structures have reduced the arroyo flows through High Desert to the water that falls on the development itself, so they no longer are significant flood or erosion problems. Thus the arroyos running through the developed areas are "dead" in the sense that they no longer carry large flows coming down from the mountain.

In return for being allowed to maintain the arroyos within the development in their natural condition, High Desert accepted some obligations for maintenance of the arroyos.

The agreement with AMAFCA that allowed High Desert to maintain the arroyos in a natural state requires that a study be performed every three years or after any significant storm to assess any changes in their state. The study consists of walking the arroyos and taking 600 to 700 photographs from calibrated points and in calibrated directions so a direct comparison can be made to detect any changes. Half the cost of the study is born by HDROA and half by AMAFCA. If the study shows any unusual changes in the arroyo that require mitigation or correction, the Association is responsible for fixing them.

High Desert must also clean or "de-silt" the collection ponds when there is a chance that silt will be carried into the City storm drain system. We are also obliged to make certain repairs to the arroyo system after major storms. If major storm damage occurs, we have an Arroyo Reserve Account to cover our part of the repairs.

High Desert is allowed to maintain the arroyos in their natural condition as a result of an agreement between High Desert Residential Owners Association (HDROA) and the Albuquerque Metropolitan Arroyo Flood Control Authority (AMAFCA). These inspections are a central part of the agreement and are one of the expenses we incur as owners of property in High Desert. This agreement calls for inspections every three years to ensure that the arroyos do not deteriorate and cause damage to the storm system maintained by AMAFCA. This system provides protection for the parts of the city subject to flood damage.

At the time High Desert was designed there had been no attempts to integrate a community around an arroyo system maintained in its natural state.The agreement to do so was the accomplishment in large part of Michial M. Emery, a Bohannan-Huston engineer (see the plaque mounted at Michial Emery Trailhead on High Desert Street near the end of Spain). Their plan recognized that during significant storms the arroyos could carry very large amounts of run-off which needs to be processed in a manner so that damage to both property and the storm drain system would not occur.

The design implemented a series of diversion dams and collection ponds that controlled flows within the arroyos as well as into the storm drain system. You can see many of the ponds along Blue Grama Road and High Desert Street, where the arroyos come down across the entire width of the development. In addition, there are several diversion dams and water harvesting features integrated into the system.

What the Inspection Does:
The mechanism chosen to evaluate how well the system is performing and how well it is being maintained is a series of photographs taken every three years. These photographs are at 100-foot intervals along the arroyo bottoms looking generally up the drainages. As the area weathers and vegetation evolves, these photographs identify any changes that may require mitigation under the agreement.

The High Desert landscape project includes provisions to deal with mitigation required by the AMAFCA agreement. The Landscape Project includes about 70 acres of irrigated landscaping and 240 acres of open space. The open space consists mostly of arroyos with AMAFCA drainage easements, although there are some private arroyos that are not under the jurisdiction of AMAFCA regulation.